A Little Ray of Giving

This Year The Salvation Army Bellarine Peninsula are partnering with Ray White Drysdale for their Little Ray of Giving Christmas Campaign. If you would like to donate a gift for us to distribute to the needy of the Bellarine then simply pop into our office on 16 Collins Street, in Drysdale (Just next door to the Drysdale Pub). Thank you so much. 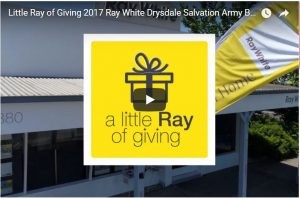 Finnan’s Gift was set up by Alisa and Oliver Camplin-Warner to honour their son Finnan who was diagnosed in-utero with congenital heart disease (CHD) and passed away at just 10-days-old. The project aims to raise funds for The Royal Children’s Hospital, Melbourne and awareness for CHD, which is the leading cause of death in young children in Australia.

Touched by Finnan’s story, Ray White offices in Victoria raised over $75,000 to support Finnan’s Gift in 2014 and are fundraising again in 2015. Staff at individual offices have been challenged to raise funds as a team and individually to help reach this goal. They will be holding BBQ’s, bingo nights, cake stalls, chocolate drives, walk-a-thons and lots more activities over the next few months.

To read more or make a donation visit: www.finnansgift.gofundraise.com.au

The EJ Whitten Foundation honours the legacy of EJ “Mr Football” who died after a long and public battle with Prostate Cancer. EJ was the first man of his era to give a voice to Prostate Cancer Awareness.

Since it’s inception in 1995, the EJ Whitten Foundation has raised over $7 million dollars for Prostate Cancer Research and Awareness.

We thank all our sponsors, partners and supporters for assisting us to find a cure for Prostate Cancer. The  legendary EJ would be proud of our efforts.

The Objectives of the E.J Whitten Foundation are:

We aim to raise awareness of prostate cancer, through our numerous campaigns and events. An increase of awareness will hopefully result in regular testing and early detection.

Raise Funds for research in to the Disease:

The Foundation hosts a variety of events each year, both in Victoria and interstate. At every event, funds are raised for research in to the disease.

Each year the Good Friday Appeal brings together people from all parts of the community to raise much needed funds for equipment, research and education to support the work of The Royal Children’s Hospital.

The activities of the Good Friday Appeal lead up to an all-day telethon, broadcast live across Victoria on Good Friday and supported by the Herald Sun, Channel 7 and 3AW 693.

The Good Friday Appeal is a non-denominational, non-political organisation that exists solely to raise funds for the benefit of The Royal Children’s Hospital.

On occasion, at the request of the Hospital, funds raised from a variety of sources may be directed to research and education. These include, the partners of the Hospital on campus, The University of Melbourne Department of Paediatrics and the Murdoch Children’s Research Institute.